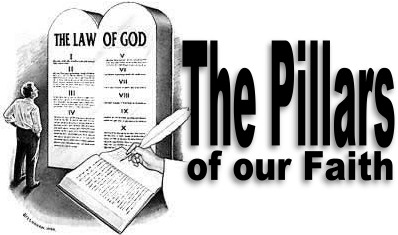 WHAT ARE THE PILLARS OF OUR FAITH?
"The passing of time in 1844 was a period of great events, opening our astonished eyes the cleansing of the sanctuary transpiring in heaven, and having decided relation to God's people upon the earth, (also) the first and second angels' messages and the third, unfurling the banner on which was inscribed, 'The commandments of God and the faith of Jesus.' One of the landmarks under this message was the temple of God, seen by His truth-loving people in heaven, and the ark containing the law of God. The light of the Sabbath of the fourth commandment flashed its strong rays in the pathway of the transgressor of God's law. The non-immortality of the wicked is an old landmark." Counsels to Writers and Editors, p 30.    (For further study: Proverbs 9:1; Hebrews 6:2; 1888 Materials, p 518; Spirit of Prophecy, vol 4, p 258, 313, 377, 399; Testimonies, vol 6, p 91, 144; Evangelism, p 273; Early Writings, p 63, 87, 258; Great Controversy, p 409; Life Sketches, p 278).

WHY ARE THEY NEEDED?

"If the foundations be destroyed, what can the righteous do?" Psalms 11:3.

"As a people we are to stand firm on the platform of eternal truth that has withstood test and trial. We are to hold to the sure pillars of our faith. The principles of truth that God has revealed to us are our only true foundation. They have made us what we are. The lapse of time has not lessened their value." Counsels to Writers and Editors, p 52.

"Men will arise with interpretations of scripture which are to them truth, but which are not truth. The truth for this time, God has given us as a foundation for our faith. He Himself has taught us what is truth. One will arise, and still another, with new light which contradicts the light God has given under the demonstration of His Holy Spirit... We are not to receive the words of those who come with a message that contradicts the special points of our faith." Counsels to Writers and Editors, p 32.

"And I saw another angel fly in the midst of heaven, having the everlasting gospel to preach unto them that dwell on the earth, and to every nation, and kindred, and tongue, and people, Saying with a loud voice, Fear God, and give glory to him; for the hour of his judgment is come: and worship him that made heaven, and earth, and the sea, and the fountains of waters." Revelation 14:6-7.

"And there followed another angel saying, Babylon is fallen, is fallen that great city, because she made all nations drink of the wine of the wrath of her fornication." Revelation 14:8.

3. THE HEAVENLY TEMPLE, ARK, AND IMMUTABLE LAW OF GOD

"And let them make me a sanctuary; that I may dwell among them. According to all that I shew thee, after the pattern of the tabernacle, and the pattern of all the instruments therefore, even so shall ye make it." Exodus 25:8-9.

"And the temple of God was opened in heaven, and there was seen in his temple the ark of his testament." Revelation 11:19.

"Let us hear the conclusion of the whole matter: Fear God, and keep his commandments: for this is the whole duty of man. For God shall bring every work into judgment, with every secret thing, whether it be good, or whether it be evil." Ecclesiastes 12:13-14.

"And he said unto me, Unto two thousand and three hundred days; then shall the sanctuary be cleansed." Daniel 8:14.

"And the third angel followed them saying with a loud voice, If any man worship the beast and his image, and receive his mark in his forehead, or in his hand, The same shall drink of the wine of the wrath of God, which is poured out without mixture into the cup of his indignation; and he shall be tormented with fire and brimstone in the presence of the holy angels, and in the presence of the Lamb: And the smoke of their torment ascendeth up for ever and ever: and they have no rest day nor night, who worship the beast and his image, and whosoever receiveth the mark of his name. Here is the patience of the saints: here are they that keep the commandments of God, and the faith of Jesus." Revelation 14:9-12

"And after these things I saw another angel come down from heaven, having great power; and the earth was lightened with his glory. And he cried mightily with a strong voice, saying, Babylon the great is fallen, is fallen, and is become the habitation of devils, and the hold of every foul spirit, and a cage of every unclean and hateful bird. For all nations have drunk of the wine of the wrath of her fornication, and the kings of the earth have committed fornication with her, and the merchants of the earth are waxed rich through the abundance of her delicacies. And I heard another voice from heaven, saying, Come out of her, my people, that ye be not partakers of her sins, and that ye receive not of her plagues. For her sins have reached unto heaven, and God hath remembered her iniquities." Revelation 18:1-5.

7. NON-IMMORTALITY OF THE SOUL (State of the dead)

"For the living know that they shall die: but the dead know not any thing, neither have they any more a reward; for the memory of them is forgotten. Also their love, and their hatred, and their envy, is now perished; neither have they any more a portion for ever in any thing that is done under the sun... for there is no work, nor device, nor knowledge, nor wisdom, in the grave, whither thou goest." Ecclesiastes 9:5-6, 10.

Death is a state of silence, inactivity, and entire unconsciousness, referred to in the Bible as "sleep". Therefore the scriptures clearly confirm that all apparitions of those who have died, including the Virgin Mary, are the spirits of demons working miracles to deceive, if possible, God's people (see Revelation 16:14). The investigative judgment determines whether the dead will awaken at Christ's second coming being raised in the first resurrection to inherit everlasting life, or remaining in the grave until the second resurrection to be consumed in the lake fire which is the second death.    (For further study: Job 14:21; Ezekiel 18:4; Matthew 22:30; John 11:24-25; Acts 2:29, 34; Colossians 3:4; 1 Corinthians 15:22-23; 1 Thessalonians 4:15-17; Revelation 14:13, 20:5, 21:4; Hebrews 9:24; Isaiah 26:14; Ecclesiastes 3:20; Desire of Ages, p 527; Early Writings, p 262; Acts of Apostles, p 289; Testimony to Ministers, p 457.)

BIBLICAL INTERPRETATIONS REGARDING DANIEL AND REVELATION

We concur along with our Adventist pioneers, including Ellen White, that the correct interpretations of the major prophecies of Daniel are as follows:

We concur along with our Adventist pioneers, including Ellen White, that the correct interpretations of the major
prophecies of Revelation are as follows:

Ellen White was in agreement with the above, even stating that the rider of the white horse in the first seal represented Christ (Gospel truth) going forth "conquering and to conquer" through His followers after His ascension (see Acts of Apostles, p 23; Sons and Daughters of God, p 358; SDA Bible Commentary, vol 4, p 1146). Also Ellen White indicated that both the 3rd and 4th seals were already history stating that this "history shall be repeated" (see Manuscript Releases, vol 9, p 7 - Letter 65, August 23, 1898).

Ellen White was in agreement with the above, even stating that the 6th trumpet represented the turks, and the hour, day, month, and year ended in 1840 (see Great Controversy, p 334; Maranatha, p 152).